Connection and Influence – Lessons from Politics, Hostage Negotiation and Speaking

Do you agree that the ability to connect, engage and influence are essential skills to thriving in today’s business environment? However, if you want to fine tune your skills there a few better to learn from than those who have done it at the highest level.  Some arena’s such as political campaigning, professional speaking and hostage negotiation have the ability to fully put these skills to the test. My guests are Simon Bucknall who from a political campaigning background became twice UK and Ireland Champion of Public Speaking and in the top 20 out of 26,000 speakers at the World Championships in Arizona. Also, Richard Mullender a former Lead Trainer at the National Crisis and Hostage Negotiation unit at Scotland Yard in London. Richard has designed and run courses for the Met- ropolitan Police, United Nations, FBI and South African’s ‘Scorpions Unit’. Join us for some great wisdom into how to truly connect and influence others to help you more effectively achieve your desired outcomes.

To access the show and listen now, please visit: http://www.voiceamerica.com/episode/85505/connection-and-influence-lessons-from-politics-hostage-negotiation-and-speaking

Twice UK & Ireland Champion of Public Speaking, Simon helps professionals, leaders and opinion formers be more influential and inspiring through the spoken word. He took an interest in speaking while Head of Office for a senior Parliamentarian in the House of Commons in 2004. The following year, he ran the General Election constituency campaign to elect England’s youngest MP, coming from third place to win. In 2007, Simon was in the top 20 out of 26,000 speakers at the finals of the World Championships of Public Speaking in Phoenix, Arizona. A speaker, coach and facilitator since 2008, he has worked with groups from countries, including Pakistan, Ukraine, Holland, Germany, Japan, India and the UAE. Simon holds de- grees from Oxford University and the London School of Oriental & African Studies. He is a Fellow of the Professional Speaking Association and Royal Society for the Arts. In 2013, he was awarded Freedom of the City of London. He lives in London with his wife and two children.

Richard has more than 25 years experience working in the London Metropolitan Police, most recently as the former Lead Trainer at the National Crisis and Hostage Negotiation Unit at Scot- land Yard. Richard brings a unique breadth and depth of experience, having designed and run courses all over the world, developing the negotiation skills of officers for organisations which include the Metropolitan Police, the United Nations, the FBI, South Africa’s ‘Scorpions’ Unit, the Indian and the Maltese Secret Services. Outside the world of policing, Richard has deliv- ered programmes for teams at Shell, BAE, IMI, Oracle, Cambridge University, BNP Paribas, SAS Software, the Tate Gallery, The Chartered Institute of Management Accountants. He has also delivered a succession of highly successful 4-day public courses for executives in the Gulf region over the past five years. He is currently retained as an adviser to a new television series portraying hostage negotiations and murder investigations.

To access the show and listen now, please visit: http://www.voiceamerica.com/episode/85505/connection-and-influence-lessons-from-politics-hostage-negotiation-and-speaking 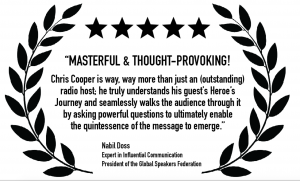