Special Encore Show: How to Entertain & Engage More in Business with Jeremy Nicholas – 27th May 2016

Business can be a serious matter, but it shouldn’t be dull! To be successful and to inspire others you need to engage well and discover your inner spark! Jeremy Nicholas is an award winning TV and radio presenter who’s been broadcasting since 1986.  He now works as a keynote speaker, compere and speaker coach. Having seen Jeremy in action, I can ensure you he is good! He talks about media matters, attracting free publicity and putting humour into your business presentations. He’s the director of Talking Toolbox, which teaches speaking skills for TV, radio and live audiences. A well known voice on the after dinner circuit, Jeremy is an accomplished host of business events working for clients such as IBM, Carling, Ericsson, Microsoft, Cognizant and Samsung. For 16 years he was also the match day announcer for West Ham United Football Club and he is the announcer on EA Sports FIFA games. Join us to to discover how to increase the entertainment and engagement in your communications. 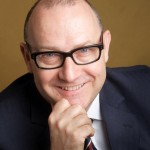 Jeremy Nicholas is an award winning TV and radio presenter, broadcasting since 1986, mainly with the BBC. He’s on a mission to make Britain’s business events less boring, by coaching speakers to be more entertaining and engaging.  After years as an MC at conferences, sitting in the wings listening to badly written, weakly structured speeches that were poorly delivered, he started approaching business speakers and asking them if they’d like their talk to be better received next time. Half were outraged at his nerve and the other half were delighted at the offer of help and became his first speaker coaching clients. He devised the Talking Toolbox system which he runs as a group masterclass and as private coaching sessions. He’s spoken at five international conventions of the Professional Speaking Association and has twice emceed the convention. Jeremy is the author of Mr Moon Has Left The Stadium, Media Masters (with Alan Stevens) and Talking Toolbox, which will be published in 2015. For more info on Jeremy please visit www.jeremynicholas.co.uk

Has your business plateaued or are you feeling stuck?   An inspiring new book written by 18 game changing leaders ‘Play The Game, How To Win In Today’s Changing Environment’ provides ideas and motivation to break the cycle that stunts your business growth. In the words of Marshall Goldsmith “This book will radically change the […]

Many thanks for your seminars last week at Nottingham Trent University at the Executive MBA. I felt they were some of the best we have had throughout the course and gave some practical measures for implementing strategies which was refreshing.