My Olympic Life with Anita DeFrantz

Would you like to make a real difference in the world? My guest Anita DeFranz was named by Newsweek as ‘One of the 150 Women Who Shake the World’ by French Magazine Le’Equipe as one of ’10 Women Who Changed Sport’ and The Sporting News as ‘One of The 100 Most Powerful People In Sport’. In 1976, Anita DeFrantz captained the U.S. women’s rowing team and won a bronze medal at the Montreal Olympic Games. Coming from a long tradition of fighting for equality and justice her story is an extremely fascinating and inspiring one. Anita, for example,  amongst many other roles, is the first African-American and American woman to be a member of the International Olympic Committee and the IOC Executive Board. Having had the privilege to meet Anita,her amazing story and the lessons she shares will, I can assure you, benefit anyone wishing to make a positive impact on the world. Join me for this very special interview with Anita DeFrantz. 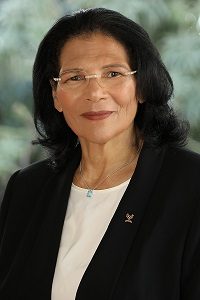 ANITA DEFRANTZ is a member of the International Olympic Committee and the IOC Executive Board. She serves on the Juridical Commission of the IOC and on the Finance Commission. Before she joined the ranks of the IOC, DeFrantz captained the U.S. women’s rowing team and rowed in the eight that won a bronze medal at the 1976 Montreal Olympic Games. DeFrantz served as Vice President of the 1984 Los Angeles Olympic Organizing Committee and was elected to IOC membership in 1986, making her not only the first African-American but also the first American woman to serve on the committee. In 1987, DeFrantz began her 28-year role stewarding the legacy of 1984 LA Games as president of the LA84 Foundation. In 1992, she was named a member of the IOC Executive Board. In 1997, she became the organization’s first female vice president, a position she held until 2001.

Currently, she is president of the Tubman Truth Corp., an organization working to provide liberty and justice for all people.

See All News
“It was a pleasure to be a guest on Chris´s Voice America show; I hope I was
able to share a few nuggets from my experience in business. Chris – you are
a natural communicator and connector.Chris kindly accepted an invitation to spend a couple of days with me after
the show, to rekindle his connection with the Yorkshire Dales.  It was a
pleasure to get to know Chris more and understand even more of what he
offers his clients and, potentially, clients I work with too.It was a great investment of my time, understanding the dynamic and
breadth of Chris’s range of skills. Chris is a ‘people’ person; he has an ability
to get the heart of issues and help people work through these, both
individually and as teams. I am really excited about exploring ways to work
more closely with Chris in the future. I am also looking forward to reading his
forthcoming book ‘The Power to Get Things Done’.If you want to ‘be more and achieve more’ you need to talk to Chris; he will
make a difference in so many ways.”
Roger Masterson – Owner of Celtic Castles More Testimonials