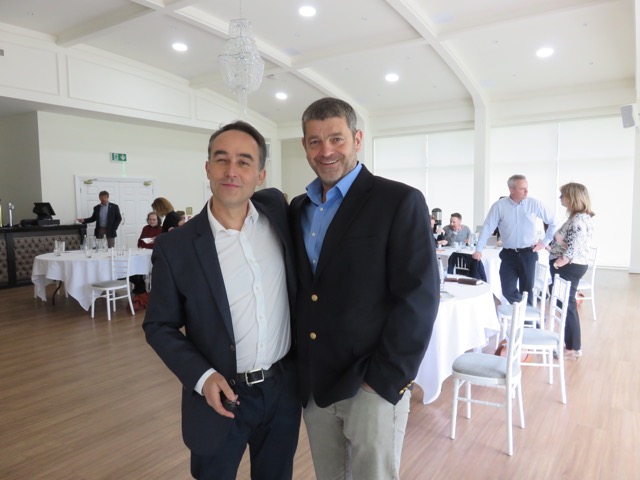 Last week at our ‘Let’s Get Engaged’ event it was great to spend time with the most accomplished Ocean rower in history Mick Dawson. Mick had us on the edge of our seats with tails of adventure not only rowing the Atlantic but one of the last great firsts – The North Pacific! Why he is not one of the most famous adventurers in Britain I do not know!

Mick first attempted to paddle his rowing boat across the 7000 mile North Pacific from Japan to San Francisco. His first trip failed due to a typhoon. On his second trip after filming incredible wildlife and being adopted by killer whales he sank after 109 days and miraculously and with great skill (he is an ex Royal Marine) survived. Though sadly his film did not. Did Mick give up? No!

This time he realized that to achieve the unachievable it would need two people. So he found the perfect person. He and Chris Martin set off rowing 2 hours on and 2 hours off 24 hours a day until after an incredible set of obstacles landed in San Francisco 189 days later in 2009! Awesome.

It was therefore a pleasure to get to know the man behind the paddle. His next venture is to row the South Pacific from Monterey to Hawaii in the Great Pacific Challenge with blind veteran, Steve Sparkes. Steve will become the first blind person ever to row the Pacific where they will both raise valuable funds for Blind Veterans UK and The Royal Marines Charity.

The message. When leaders have a compelling vision they never give up. It does not matter how big the obstacle they keep on going. For some that might even involve unusual work patterns –  two hours on two hours off 24 hours a day and of course lots of hard graft! If you love tails of adventure myself and colleague John Jennings were absolutely enthralled reading Mick’s book. A gift for anyone with an adventurous streak like myself who spends most of their time in relative safety with their family while marveling at the adventures of others do buy ‘Rowing the Pacific’

To hear my interview with Mick Dawson https://www.voiceamerica.com/episode/103308/rowing-the-pacific-lessons-from-the-ultimate-rowing-challenge
To find out more about Mick Dawson, book him as a speaker or find out how to support his next adventure http://www.189days.com

Chris Cooper is an engagement, leadership and team development specialist, coach, workshop facilitator and speaker based in the UK. Chris is also a highly experienced Talent Dynamics facilitator. He is host of the Business Elevation Show the most accessed business show on Voice America in 2017 and Co-Author of The Power To Get Things Done (Whether You Feel Like It Or Not). He is a fellow of the Professional Speaking Association and partner of Engagement Multiplier .
To contact Chris to see how he and his business can help you : Chris@chriscooper.co.uk

Be it coaching an executive, coaching a manager, or coaching a team, there’s no mistaking that coaching is an essential path to human and leadership growth. But not all coaching is equal, and not all coaches are alike. Whether someone is being coached for development or for performance, the need for good and diverse styles […]

‘We booked Chris to give a keynote speech at our Annual Customer Day at the National Space Centre in Leicester on ‘The Power To Get Things Done (Whether You Feel Like It Or Not’. His speech was thought provoking and engaging and Chris also worked very well with me to make it relevant to our agenda. I would therefore recommend Chris to anyone looking to book a speaker for their event’ Guy Van Der Knaap, Managing Director MCS UK